"The pandemic and the consumer’s reaction to it has changed everything. The pandemic has shattered the long-established patterns of buying and selling properties in the recreational marketplace. Having said that, as we close out the month of June, there are some indications that the Muskoka and Region marketplace is, in some respects, returning to pre-pandemic performance.

The chart below very dramatically illustrates how the recreational waterfront marketplace has unfolded in the first six months of 2020 and 2021.

The first four months of 2020 were reflective of past market cycles. By May everyone was looking for recreational property and the safety, security, and space that recreational properties offer. By June the  waterfront market had exploded. This year effectively began where 2020 left off. Most noticeably March and April, historically slow, were performing like the strongest selling months in previous years.

It is not surprising that we see market moderation in June. That’s due to a number of factors, both economic and pandemic related. On the economic side prices have been driven to unprecedented levels, while at the same time supply has declined. Beyond the economic factors, the frenzied need to acquire a recreational property has somewhat abated. The expansion of the vaccination program has made buyers less concerned about safety and space, and the softening of restrictions, especially travel restrictions, have driven the consumer’s attention, at least temporarily, away from the buying and selling of recreational real estate.

June’s Muskoka waterfront data clearly illustrates the state of the recreational market. Inventory, both new properties coming to market and month-end supply, have declined from last year, average and median prices are up substantially compared to last year, sales are taking place in half the time they did compare to June 2020, and sales, because of increased prices, lack of supply, and the non-economic factors set out above, have declined.

The year-to-date market data indicates that declining sales in June was a new but not unexpected development. With some minor variations, the Muskoka data (which includes both the three Big Lakes and the surrounding smaller lakes) can be replicated in the entire region’s submarkets, Huntsville, Lake of Bays, Haliburton, as well as the major towns in the region.

For example in Haliburton property sales increased by almost 29 percent in the second quarter of 2021 compared to the same quarter in 2020. Months of inventory numbered one (1), down from the 1.4 months recorded last year. The median days on market was an eye-popping 9 days, dramatically down from the 25.5 days it took properties to sell last year. Not surprisingly a new record average sale price of $804,000 was recorded in the second quarter, also an eye-popping 56.1 percent higher than on a year over year basis.

In Lake of Bays sales marginally decreased in the second quarter, primarily because of a decline in supply. Like the Haliburton recreational waterfront marketplace, properties spend little time on the market, only 9 days, a 66 percent decline from the 27 days it took last year. Not surprisingly, the average sale price continued into record breaking territory coming in at $1,180,000 in the second quarter, 31 percent higher than the same period last year.

On Muskoka’s Big Lakes (Lakes Rosseau, Joseph and Muskoka) the average sale price for all sales continued to decline while the segment of properties selling for $5 Million or more has continued to increase as the charts below clearly indicate. 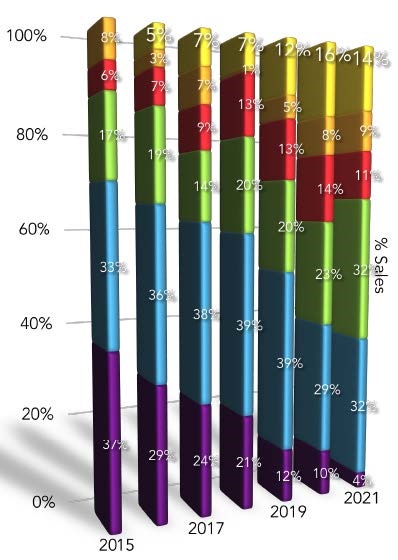 The decline in average sale price ($3,033,676 is still a lofty number) is not an indication that prices are softening on the Big Lakes. Rather as the sales in the price segment chart indicate, during the pandemic there have been more Big Lake property sales in the $1 Million to $3 Million range than in the past, pulling average sale prices down. It is worth noting that 14 percent of all recorded sales on the Big Lakes were in the $5 Million plus range.

The chart below chronicles the supply side over the past four years. The supply of available recreational properties started to decline in April 2020 and has declined to chronically low levels in the first six months of 2021.

Chestnut Park’s sales representatives have effectively and professionally adapted to the many challenges generated by the pandemic, especially during the first half of 2021. In this tight market we have been able to meet the needs of our buyers and sellers and in the process have generated a performance that has exceeded the market and has continued to position Chestnut Park and its agents as market leaders. During the first six months of this year, we have been responsible for almost $325 Million in sales volume, a 20 percent increase compared to last year. Chestnut Park’s Port Carling office has been responsible for more than $160 Million in property sales, 35 percent more than the closest competitor brokerage (Information gathered from The Lakelands Board).

Looking towards the second half of 2021 we can anticipate a moderation to the frenetic pace the market has been on. This calmer, though still a very robust market, is due to the incredible appreciation in sale prices, and the lack of supply, particularly at the lower, more affordable price points. It should also be noted that by June of 2021 we found ourselves in the same position as we were historically in October. The pandemic concentrated sales activity that would normally have taken place over the course of the entire year the January to June period. Longer-term, particularly as Covid restrictions and related consumer psychology dissipate, we should anticipate a return to more normal, yet strong, market behavior with the troubling lack of supply being the major concern in the recreational market agenda."

Want to Stay in the Know?

Sign up below to receive my Muskoka cottage blogs straight to your inbox. I promise to only send you relevant and useful information. You can unsubscribe at any time by clicking the link in our emails.

This website is operated by a brokerage or salesperson who is a member of The Canadian Real Estate Association.

The listing content on this website is protected by copyright and other laws, and is intended solely for the private, non-commercial use by individuals. Any other reproduction, distribution or use of the content, in whole or in part, is specifically forbidden. The prohibited uses include commercial use, "screen scraping", "database scraping", and any other activity intended to collect, store, reorganize or manipulate data on the pages produced by or displayed on this website.